Another 103,680 Meals Reaches the Neediest in Haiti 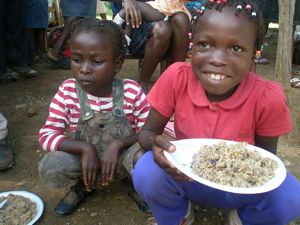 One of our biggest problems was determining which families were in the greatest need, when EVERYONE is so desperate.

We held four medical clinics in four different villages in the mountains.  We had to hide the boxes of food to avoid a stampede and total disorder. When the medical personnel examining the people determined that food was a necessity, they would refer the person to a private area where the food was either put into a dark bag, or the person hid the food under their clothing and such.  There were MANY people asking for food.

At three of the clinics we hired women to prepare the food and all of the children and many adults were fed.  Photos show you the happy children as they ate in abundance.  Please feel the joy that was given to so many. 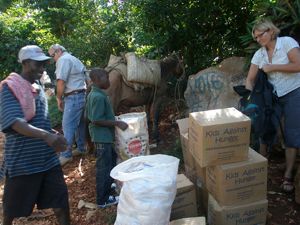 Two horses were loaded down with bags of the food, as well.  Two large gunnysacks were filled with the bags of food and discretely tied to the saddle for the men to take the food to an area we were not able to visit.  Many, many people will be fed by that supply, as well.

We also had to send two children who were burned severely to a hospital that had NOTHING to offer.  The patients are expected to provide their own food, so we had the blessing of leaving bags of food with the parents of these children suffering with severe burns.

When we returned to Port-au-Prince, we brought five children with us who are in dire need of medical care.  We have them in a separate dwelling and were able to leave the packets of food with a cook preparing food for them, as well. 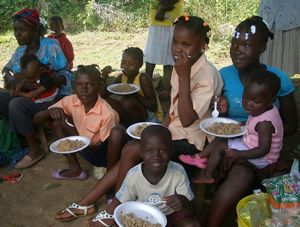 On Saturday, I was literally leaving an orphanage in a tent city.  We found the children there totally desperate and eating dried crumbs.  Some of the children were naked - and most looked dirty and forlorn. We were so happy that we had brought three large boxes of food and were able to leave it with the woman in charge to feed these innocent children.As you may have guessed - the need for food here is endless.  We had to be very careful how we distributed it, as we wanted to be able to provide for the most hungry and desperate. I have no way of adequately thanking you for the abundance of food you were part of providing.  Thousands of children will have eaten because of your organization. 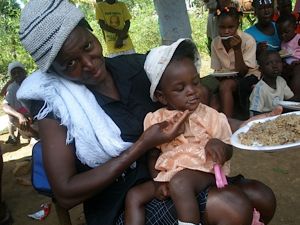 If it wasn't for KIDS AGAINST HUNGER providing such an abundance of food to distribute in these remote areas and needy orphanages, I can't even imagine the hungry children that would have been left behind. The number of children with malnutrition was absolutely heart wrenching.

There is such a great need in the mountains to establish a full time feeding program for the malnourished children. We discussed today with our pastor in this area the possibility of opening a clinic for severely malnourished children needing not only food, but also medical care for those in critical condition.

Any future shipments that would help this become a reality would be greatly appreciated. Many thanks to each provider that has been an answer to many prayers for these innocent children.”

Our revolutionary food package provides 6 nutritionally-complete servings for only 20 cents per serving.

Our mission is to feed starving children and help end world hunger. We accomplish our mission: