By An East Hills 4-H Member

While attending 4-H SET Career Day this past April, I learned there was a community service opportunity at the event. I was directed to a table where several sewing machines and empty rice bags were set up. I learned that these rice bags were being sewn into tote bags to help Kids Against Hunger raise donations to pack meals to ship around the world. I eagerly began sewing. However, my eagerness came from wanting to get enough community service credits in my record book to apply for a star rank. I didn't realize that my one bag would make any real difference to anything except my community service slot in my record book.

A month later, there was a Kids Against Hunger packing event on May 21. Although I didn't attend this event, Zachary D. wrote an article about it for the June 2012 East Hills 4-H Newsletter, which I read with interest. His article said that first the 4-Hers went into the main packing area, where they started measuring ingredients into the food bags. After that was completed, the bags were meticulously weighed, and then the excess air was drawn out and the bags were heat-sealed. Then other volunteers flattened the finished bags and packed them into the boxes. 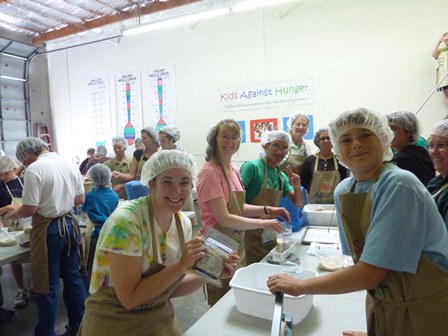 I forgot about Kids Against Hunger until one day in August. My uncle had just come back from his trip to the Philippines, and he was showing my family some photos from his trip. He was telling us about how he had been helping an orphanage in the Philippines serve meals to people living in the neighboring slums. He was scrolling through some pictures when I saw a photo of a girl playing with a box with a strangely familiar logo.

My uncle looked surprised. He said, “How do you know about Kids Against Hunger? That's the group that was behind all of those feedings that we were doing!”

My uncle explained that first, some cooks at the community center had cooked two 3 ft. x 2 ft. x 2 ft. containers full of rice porridge, using the rice, soy/wheat mixture, dried vegetables, and 'gold powder' packaged by Kids Against Hunger volunteers. (According to Zachary's article, the 'gold powder' is a high-nutrient booster that gets its name from its price – about 80 dollars per pound. One tablespoon of ‘gold powder’ has enough nutritional value to equal six meals.) About 20 volunteers would organize the feeding, set up and distribute the food. 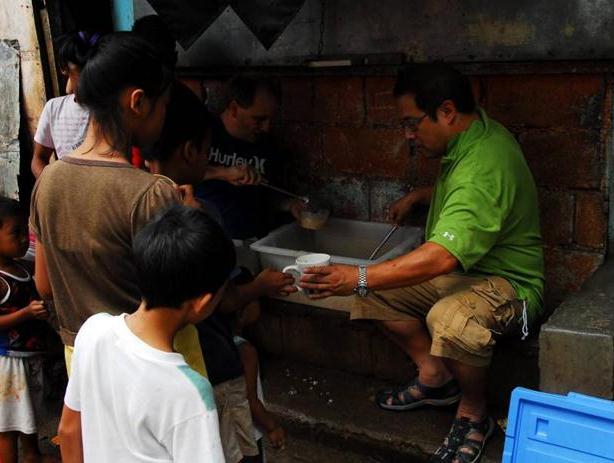 Kids lined up with their own cups and bowls and walked past while the volunteers scooped the porridge. Sometimes the Kids Against Hunger meal would be the only good meal the kids would get in days. There were usually a couple hundred kids lined up for the meals. The volunteers went to a different slum each day. Each slum was visited once or twice each week. Everybody loved the feedings, my uncle said, and the rice porridge looked good too.

My uncle also told me that women from the community around the orphanage up-cycled the empty Kids Against Hunger bags into purses, which were sold by the orphanage. The bags are made from strips of plastic bags, like rice bags. They are woven together from these strips by hand, then a zipper is attached.

I had thought that the bag that I had made had just helped with my record book, and the Kids Against Hunger packing event's final outcome had seemed a bit unreal to me. But here was the other end of the story. Some of those tote bags that were sewn right in San Leandro at SET Career Day might have raised donations to help fill a real food bag packed at the warehouse in Pleasanton, which might have been unpacked by my uncle in the Philippines, might have kept some of the kids in the slums from starving, and might have given them hope.

Kids Against Hunger is still packing and sending food, and not all of it goes to far away places. This summer, a disaster preparedness packing event was held at the Alameda County Fair. The food will be stored at the fairgrounds to be used when it is needed (after an earthquake, for example). The plan is to rotate the stockpile every so often so that the food will be fresh when it is needed.

The food is paid for through donations. I believe that the fair funded their packing event, but every little bit counts. One dollar becomes four meals for people who need them. During the packing event that I participated in, we were able to taste some of the food. It is pretty good, even if you’re not starving. Bags like those sewn at SET Career day are sometimes given to people who donate a certain amount of money to the Pleasanton branch of Kids Against Hunger.

Remember: your contribution, no matter how small, can be a big help to someone in need!

Our revolutionary food package provides 6 nutritionally-complete servings for only 20 cents per serving.

Our mission is to feed starving children and help end world hunger. We accomplish our mission: